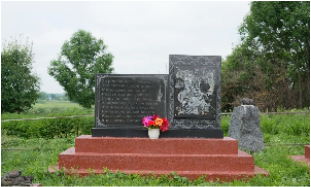 Unfortunately, documents supporting the town's status under the Magdeburg Law have not yet been found. «Krasnyi-Stav» and «Hlapotin» were mentioned in two 17th century documents: an announcement dated May 22, 1619 and a complaint dated June 1, 1623. The former referenced the Tatar plunder of the Berezdov district estate of Polish Prince Janusz Ostrogskyi on September 29-30, 1618, while the latter was from the estate manager of «Krasnyi-Stav», which belonged to Anna Chodkiewicz, the wife of Vilna's governor. The estate manager complained about the 'destruction of the large roadway running thru «Krasnyi-Stav», which was previously named “Hlapotin”'.
Krasnostav's prosperity suffered from Tatar and Cossack raids. However,  the town was always able to recover, probably due to its location along a major trading route. The tax registry for 1635 identified Krasnostav’s artisans as follow:
“Total number of artisans is 93 including 14 shoemakers, 4 blacksmith, 10 coach makers, 6 coopers,  4 carpenters, 1 saddler, 20 tailors, 2 weavers, 1 copper-smith, 4 potters, 1 violinist, 8 butchers, 2 malt makers, 4 brewers, 6 bakers”.  A Jewish school is also mentioned. The large number of artisans, some of whom possessed traditional Jewish specializations, and the presence of the Jewish school indicate a sizeable Jewish community in Krasnostav in the year 1635.
Krasnostav's prosperity suffered greatly from Cossack raids. The town was destroyed and plundered by the Cossacks in 1649, and five years later a joint force consisting of Cossacks and the army of Moscow's prince sacked the town again. In the 18th century, the region of Volhynia became less important due to a series of misfortunes that included the plague, a Cossack rebellion, and the Great Northern War between Sweden, Poland , and Russia. As a result, Krasnostav became an insignificant village.
In the second (1793) and third (1795) partitions of Poland, sections of Volhynia (including Krasnostav) were annexed by the Russian Empire. Volhynia became a part of the Pale of Settlement, and the legal rights of Jews were restricted.
The 1795 Krasnostav census did not list Jewish families but ﻿the revision list (census) of 1816 registered 87 adult Jews﻿; these were mostly young couples comprising 26 households. In 1834, the Jewish population increased to 296 and number of households to 48; at this time Jews become engaged in industrial non-mechanized production. In 1843, Jews from large shtetls in Lithuania and Belarus began to immigrate to small shtetls and villages in Volhynia because they realized there were business opportunities there. By 1870, Jews were the dominant force in commerce and industrial production in Volhynia.
Jews became a majority in Krasnostav toward the end of the 19th century. In 1897 there were 1,222 Jews living in town, which was 55 % of the total population.  The increase in the Jewish percentage of the population can be attributed to Jewish families usually having 5-10 children, and the low child mortality rate at that time. Many Jews lived near Market Square, located in the center of town; it contained a large synagogue on one side and a small one on the other. Four streets connected Market Square with the surrounding villages, and small Jewish houses, shops, and workrooms littered the narrow streets and lanes between those major streets. Most businesses in Krasnostav belonged to Jewish families. The only two story brick house in the shtetl, located in Market Square, belonged to the Kapluns. The first floor was a grocery store while the second floor was used as a residence.
including Russian soldiers, Polish soldiers, Red Cossacks and Petliura nationalists, murdered and robbed Jews. In response, the Jewish community formed an armed self-defense group, which in some situations was able to defend the shtetl and its inhabitants.
The Peace Treaty between Poland and Soviet Russia in 1921 led to the partitioning of Volhynia. The greater part of Volhynia went to the Poles, while the smaller part, including the Slavuta district and Krasnostav, remained under Soviet rule.
The end of the Civil War and the implementation of the New Economic Policy re-energized Krasnostav's economy and the well-being of its inhabitants. Farming production and income increased, and entrepreneurs opened new stores and workshops. The list of Krasnostav's manufacturing assets consisted of  3 grain mills, 2 goat mills, 2 oil presses, 3 leather goods facilities and a power station providing electricity to the town. Electrical lighting of streets, schools and clubs gave people hope that life was getting better.

However, from 1928-1941, the New Economical Policy was replaced by forced industrialization, and life in Krasnostav and other shtetls changed for the worse. The expropriation of property, agricultural products and money by the government led to economic depression and famine. Three million people died in Ukraine due to government-induced starvation («golodomor»).

A brief period of Jewish cultural awakening in 1920 was followed by the decline and the apathy of 1930, when many active Jews abandoned the shtetl for the larger towns in Ukraine and Russia. The Jewish religion and education were suppressed during this period, as they were not aligned with the official communist ideology; despite that, Krasnostav still had a Jewish elementary school between 1932 and 1938.

Many Jews in Krasnostav had the feeling that a war with Germany was coming; when the war started they did not want to evacuate because they did not believe the Soviet propaganda about what would await them at the hands of the German army. Those who recalled the Germans marching through Krasnostav during World War 1 had a positive memory of the German Army. Their reluctance to leave turned out to be a mistake of  tragic proportions. Almost all Jews remaining in Krasnostav when the Germans came, as thousands upon thousands Jews  in towns and villages across of Ukraine, were exterminated by German Special Command and the local Ukrainian police. Only two girls survived - Donna Rubinstein (Meister) and Khana Kerlich (link to Kerlich story audio file coming soon). Donna would later write a heart-breaking memoir about her horrific journey through Ukraine and Germany; it was titled «I Am the Only Survivor of Krasnostav».
Krasnostav was liberated by the Soviet Army on January 13, 1944. Fighters from a partisan resistance group blocked the road to stop retreating policemen. In the ensuing firefight a policemen named Denis Masurhuk was caught; he was later hanged in Market Square (coming soon:the audio story).
The Jews who were evacuated or survived the war by fighting in the Soviet Army had little reason to return to Krasnostav; their family members were murdered, their belongings plundered by neighbors, and there were very few opportunities for work. Those Jews moved to larger towns and cities such as Slavuta, Isyaslav, Novograd-Volynsk, Kiev, and Odessa.

So the 300 years of Jewish presence in Krasnostav came to an end. “The book was closed”, so to speak, as shtetl life was eradicated in Ukraine, Belarus, Moldova, Lithuania, Latvia and Poland. The remnants of past Jewish life can be found only by looking at the burial stones in the Krasnostav Jewish cemetery and talking to few old “babushka”,  who are old enough to remember their long-dead Jewish neighbors.
More details can be found in the The Road to Krasnostav  page.
Jewish population in Krasnostav
* Percentage of Jewish population was 55% according to Russian census data.
Copyright © 2016-2022  Tsal Kaplun Foundation